Here’s a big woolly version of my kids favourite snack.

Note! The pattern is worked in spiral, so it’s a good idea to use a stitch marker to keep count of where each round begins and ends.

Note! I use the invisible degrease stitch. When degreasing two stitches together, pick up only the front loops of the stitches. Use stitch markers if you find it hard to see where each of the degreases were made on the previous row.

Note! At this point stuff the clementine with toy stuffing and keep stuffing as needed whilst you work each round till the end.

Fasten off and weave in ends.

Leaves for the Clementine

First make a small ‘base’ for where the leaves will be attached to.

Start by making a magic loop, ch1, 6 dc in the magic loop, ss to the first ch1 to close the round. Leave a long tail for sewing, cut the yarn and weave in the tail from the beginning.

Leave a long tail at the start for sewing.

Turn work 180 degrees to work the following on the other side of the beg ch10:

Cut the yarn and weave in the end.

When sewing the leaves to the center of the ‘base’, start by sewing the yarn through the stem of the leaf. Then sew the leaf onto the base from the tip of the stem.

Lastly sew the base on top of the clementine. Weave in all ends and you’re done. 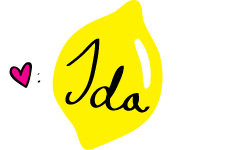